You are here: Home / Buyer Guides & Reviews / The Best Fitness Tracker Reviews for 2018

In recent years, fitness trackers have exploded as the tool of choice for exercise. After all, if you’re trying to reach a goal, it helps to know whether or not you’re reaching the checkpoints along the way! Harvard’s Medical School agrees and published an article on how trackers can help you reach your fitness goals.

Most users agree, too. In an analysis of these products, SKUlocal (a direct marketing company with a vested interest in understanding what consumers like) observed that 80% of buyers feel fitness trackers have a positive impact on their life. On the other hand, people tended to abandon devices the felt were inaccurate – and that makes sense.

With all this in mind, we decided to take a look and evaluate the options currently on the market.

How We Rated These Products 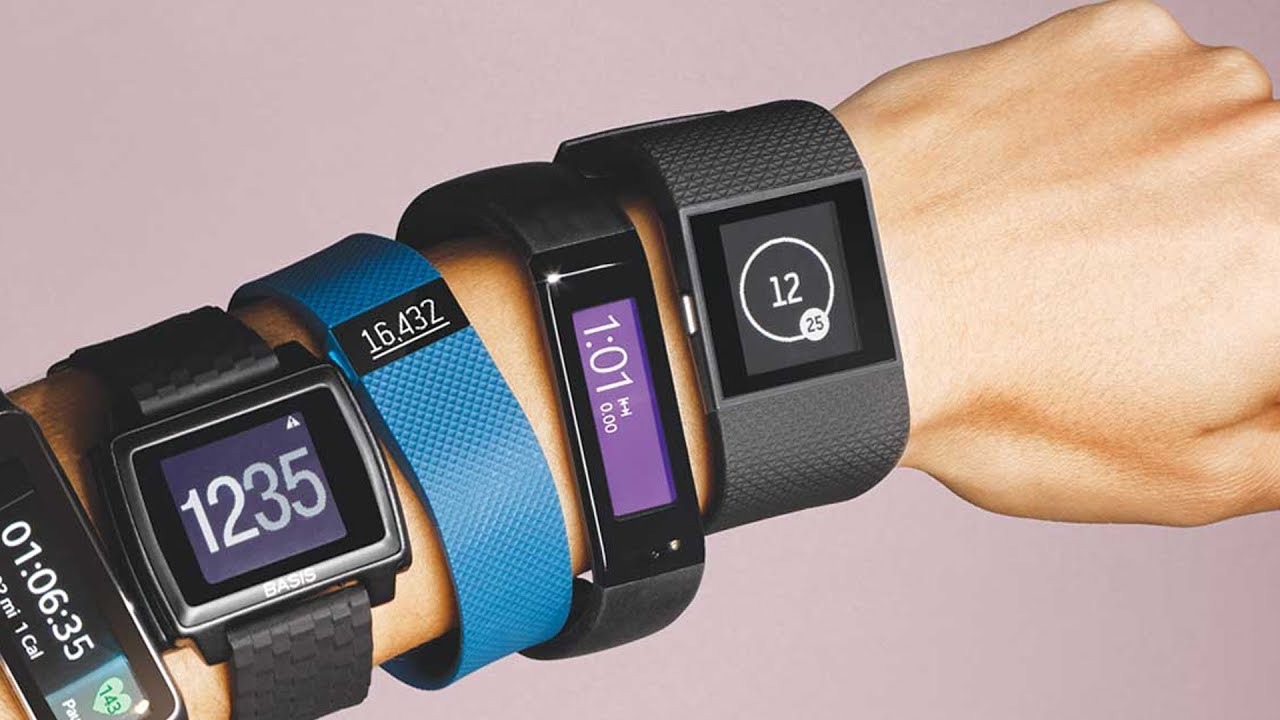 We considered several factors when deciding our ratings.

First, we took a look at the public perception of each product, including the positive and negative things that users had to say about them. We skipped products that didn’t have much notice yet.

We paid more attention to customer reviews than “official” or “sponsored” reviews, since the people who know products best are the ones using them.

Next, we considered the price of each tracker. Some are clearly more affordable than others, but we wanted to avoid the extremes of budget and luxury models. Most luxury products aren’t better as fitness trackers; they just have more elaborate cases.

Finally, we considered how good they are at tracking your fitness goals, including what kind of app support may be involved. This is crucial – if something isn’t getting the job done, it doesn’t deserve a place on this list.

As you’ll see in the reviews below, this ended up being more important than we expected. Some of the mid-range trackers are better at tracking your fitness goals than the quality models, which surprised us. Ultimately, though, we decided the bells and whistles of different modes weren’t quite as important as the overall quality of the product, and we organized our list accordingly.

Aside from these considerations, we put one more limit into place before we started – each manufacturer could only get one spot on our list. We didn’t want to wind up in a situation where one brand seemed superior enough to dominate the list, so we decided against allowing that to happen before we even started.

The Best Fitness Trackers In 2018

Now that you know how we graded the products let’s take a look at the best trackers currently on the market. We apologize in advance for the length of these product names – that’s how they’re advertised, and only the exact names can ensure you look at the product we reviewed. 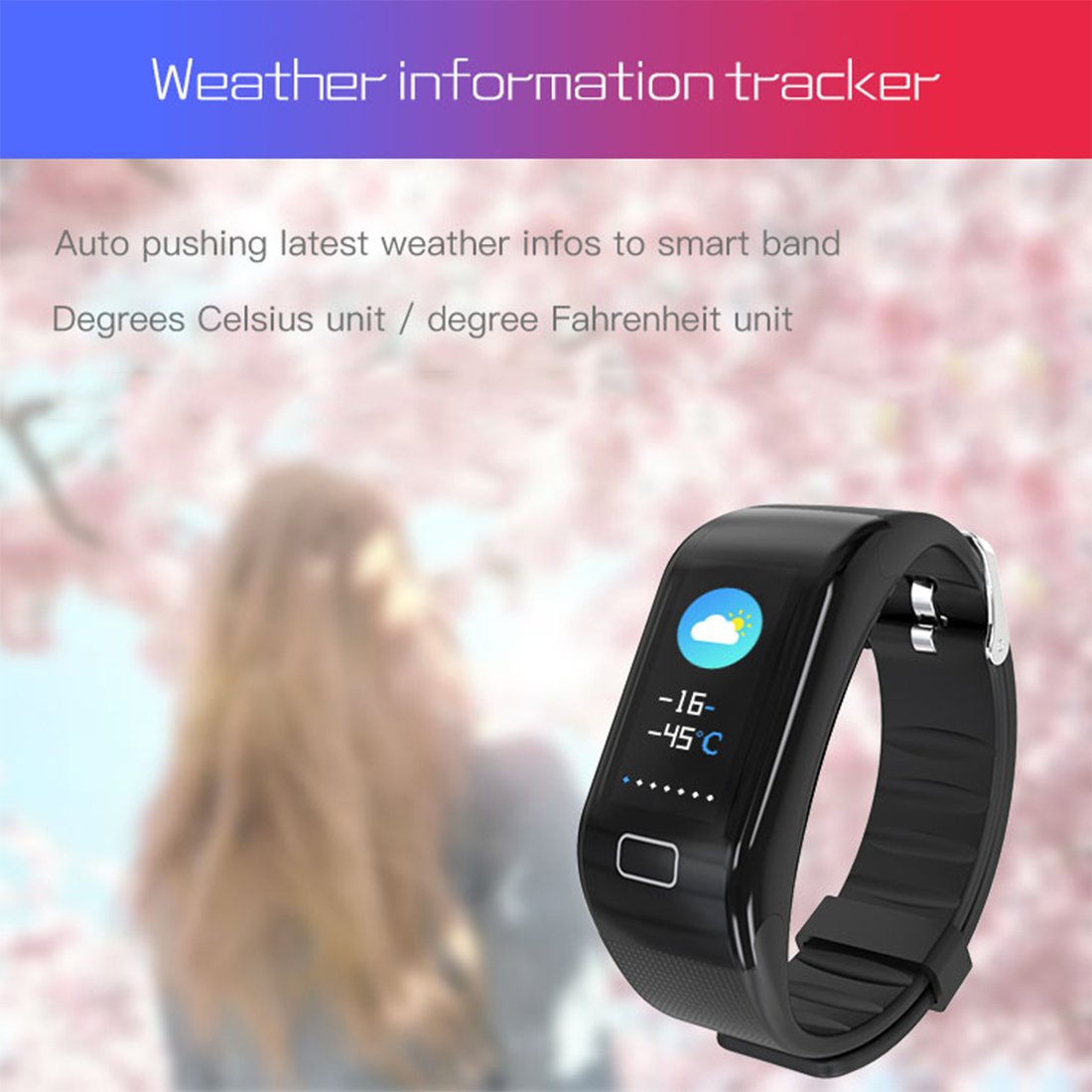 This fitness tracker is easily one of the best on the market – and with an MSRP of $40 (often on sale for less), it’s affordable on practically any budget. Given the overall value here, let’s take a look at the actual features.

The most notable feature of this product is its full-color LED screen. This screen is bright enough to easily see regardless of the time of day you’re exercising. The surface of the screen is smooth to the touch and durable enough to withstand getting banged around a bit. Of course, pretty colors alone don’t make for a good fitness tracker.

Functions on this device include time and date (naturally), as well as information on the weather, a step-based calorie counter, heart rate monitoring, blood pressure checks, and even blood oxygen checks. Stepping away from fitness a bit, it can also display text messages, act as a stopwatch, remind you of calls, tell you if you’ve been sedentary for too long, act as a remote trigger for your camera, and even help you avoid getting lost.

That’s a lot of functions on such an affordable device, and the quality of the manufacturing is impressively high. It’s also waterproof and sweatproof, though the manufacturer cautions that it’s not intended for use in hot water.

Like all fitness trackers, it needs a source of power. This product can get a full charge in two hours and normally works for up to one week. On standby, it can wait as long as 10 days before it needs to be recharged. For product support, Kimitech offers a six-month warranty plan.

Other reviews of this product are more-or-less universally positive – which is rare for any product, but even more so for those with over a hundred customer reviews that we checked. Comments include praise for how discrete it is, appreciation for how accurate it is at counting steps, and positive reactions towards how waterproof it is.

Overall, considering the genuinely glowing thoughts of buyers, the robust list of features, and the apparent lack of manufacturing defects, this Kimitech fitness tracker deserves its place at the top of our list. 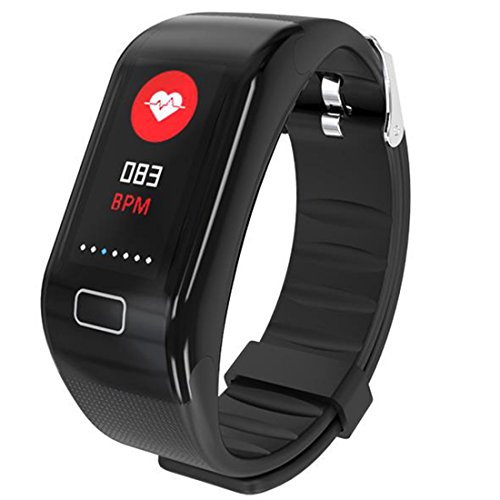 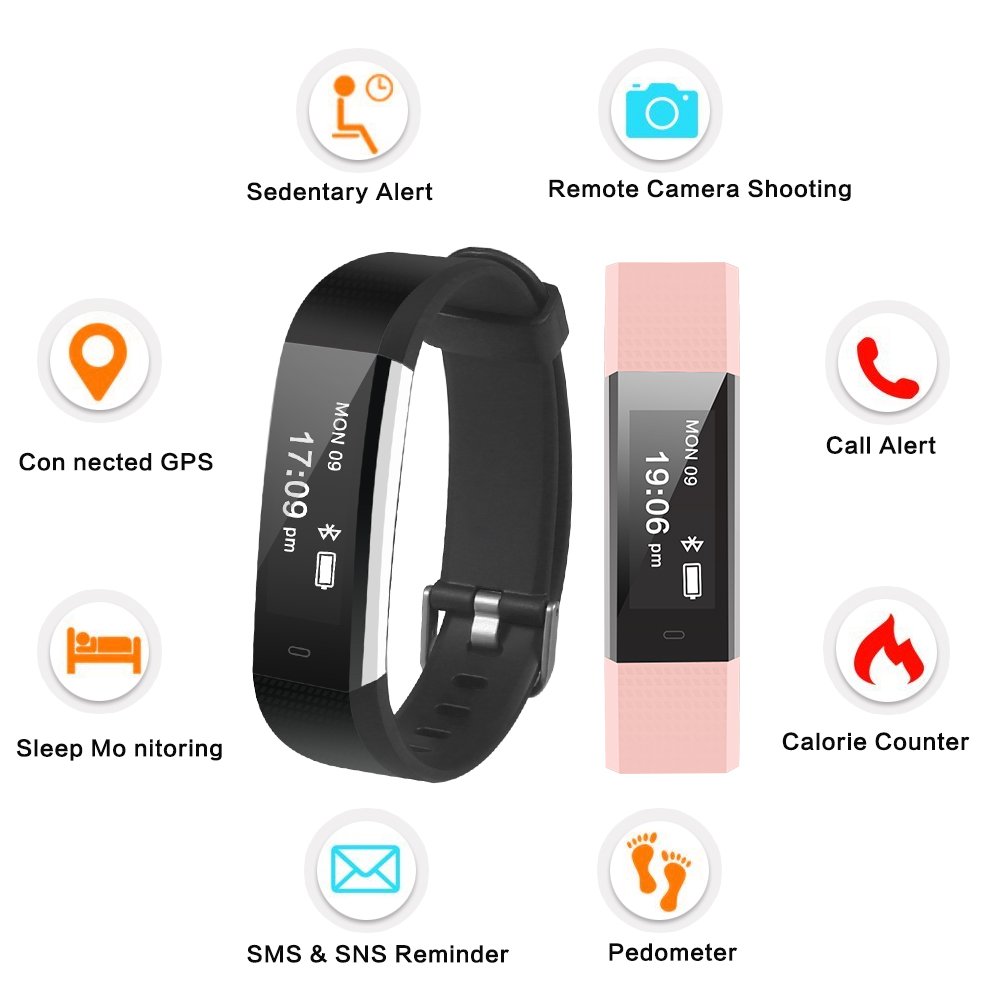 Again, we apologize for the length of these names. That’s what they’re advertised as.

Anyway, this is a slightly more budget model than the Kimitech, with the MSRP ranging from $26 to $33 based on the color you want. Major features on this model include a sedentary alert, remote camera shooting, phone call alerts, a calorie counter, a pedometer, text message reminders, sleep monitoring, and a connected GPS.

Conspicuously absent from this list is a heart rate monitor – that’s one of the reasons it didn’t get into the #1 slot despite its generally high quality.

Aside from the included programs, Damusy’s also been working to improve the overall architecture of the electronics. This allows it to process your workout data more effectively, while the waterproof design means you can keep using it in the rain or the pool. A USB-based charging system and a one-hour charge time mean you can quickly fill up the battery.

The manufacturer also offers 24/7 online support, a 30-day money-back guarantee, a 1-year replacement warranty and lifetime technical support for the product. That’s a pretty good support plan, given the low cost of this product.

Like the Kimitech, reviews of this product are broadly positive – though some people were only satisfied, rather than delighted. Buyers praised things like the easy setup, how long the battery lasted, and how affordable it is.

Critical statements were rare, and the most significant one we found has to do with the brightness of the screen. Some people feel that it’s a little too dim in direct sunlight, though making it brighter would drain the battery much faster. It’s not a horrible problem, but it is something to be aware of.

Overall, as far as budget trackers go, this is a good choice. 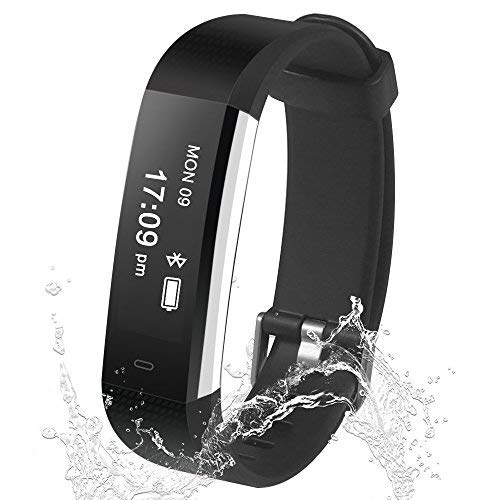 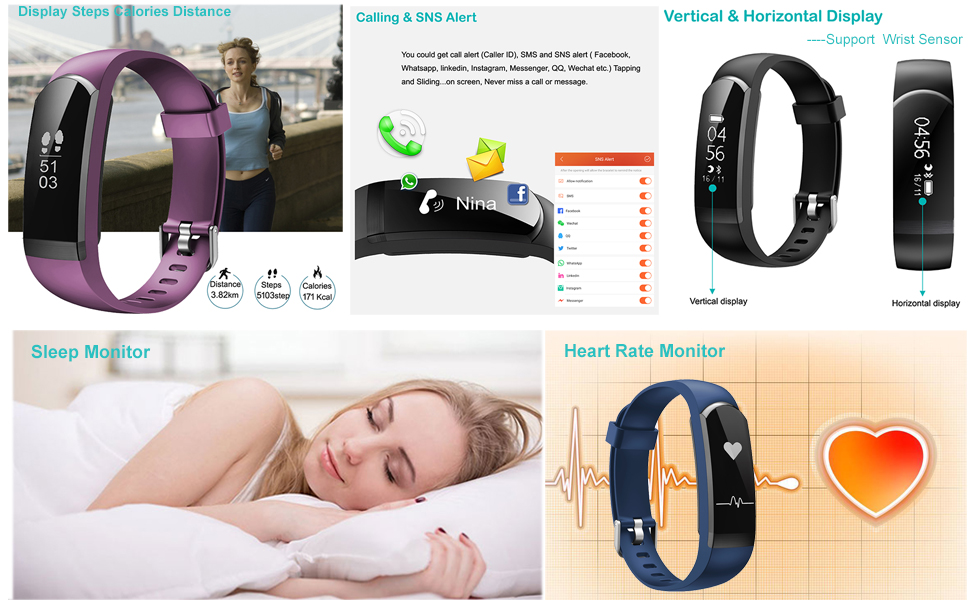 This is another competitively-priced budget fitness tracker. Pricing is similar to the Damusy and ranges from $30 for the black model to $27.49 for the blue and purple versions.

Major features on this tracker include heart rate monitoring, text message reminders, a sedentary alert, sleep monitoring, remote camera shooting, call alerts, a pedometer, a calorie counter, a connected GPS, and 14 different training modes to help you make the most of your workout. That’s a better set of features than the previous entry on this list.

The fitness modes are designed to help this tracker understand what you’re doing and adjust its records accordingly. Mountaineering isn’t the same as playing Badminton, and neither of those is quite like general fitness. Only three modes are included by default, with the others available through the app.

Other modes include dynamic cycling, treadmill use, yoga, basketball, football, tennis, dancing, and more. It’s not a complete list of things you could be doing, but it’s more than most fitness trackers do. In fact, we’re a little surprised that the first two trackers on this list don’t advertise this kind of feature.

The screen is an OLED display with a built-in USB charging plug. A full charge should last 5-8 days, and Willful offers a 30-day money-back guarantee, a 12-month warranty plan, and lifetime technical support.

Public comments are almost entirely positive, but about 4% of the buyer comments we found were neutral or negative. Positive comments include an appreciation for the price, accuracy, and comfort of the tracker. Most people noted that they were surprised by how much they liked it.

The few critical comments included a note that the device and app sometimes failed to work. Given the low percentage of critical reviews, this may be a rare manufacturing defect or software hiccup. This tracker clearly works well for most people, but not quite everyone, and that’s worth keeping in mind when you’re deciding which one to buy. 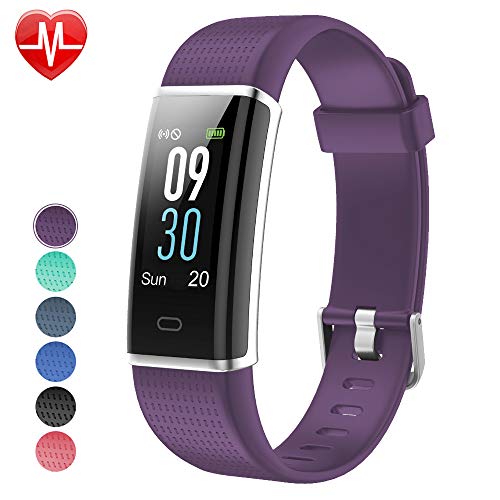 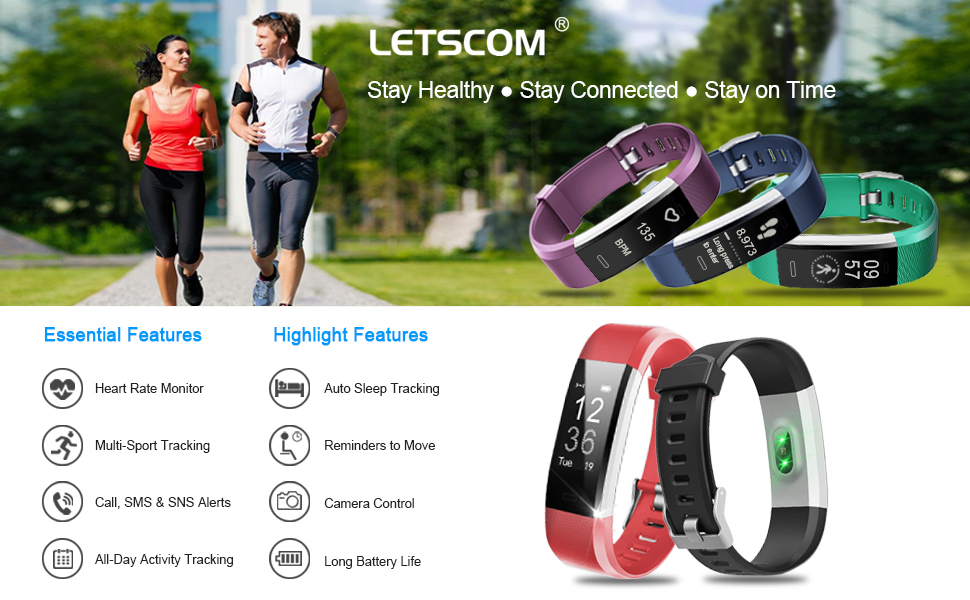 Next on our list is the LETSCOM, another tracker with a solid set of basic features. These include sleep monitoring, heart rate monitoring, a pedometer, various alarms, a camera control, a sedentary reminder, and a call reminder. Like the Willful band, this tracker comes with a variety of modes to better track your progress towards your goals.

Pricing is very competitive, with the band sold at $29 for the black version and $30 for the red, green, blue, and purple variants. This fitness tracker is meant to be worn anytime it’s not charging, and starts with 24-hour heart monitoring to help you keep track of your daily health. The manufacturer strongly recommends using their app to get more data and functions.

The built-in USB plug allows for each charging, and charges last for up to 7 days. That’s a bit less than some of the other trackers on this list, especially if you frequently exercise.

The screen itself is a standard 0.96 inch OLED (about the same size as every other tracker screen) and uses a wrist sensor to automatically brighten when you turn the watch towards your body. It’s water resistant, sweat resistant, and rainproof, but not fully waterproof – take it off for swimming and showering.

Public perception is generally favorable, with people appreciating the ease of use and the wide variety of functions. About 8% of reviews are critical, though, with negative commentary mainly focusing on its lack of accuracy for counting steps.

Most buyers felt that this band is good for other types of sports, but if you’re mainly interested in the pedometer function, you should get a different band. Too many people reported this as an issue for us to dismiss it as a one-time oddity. 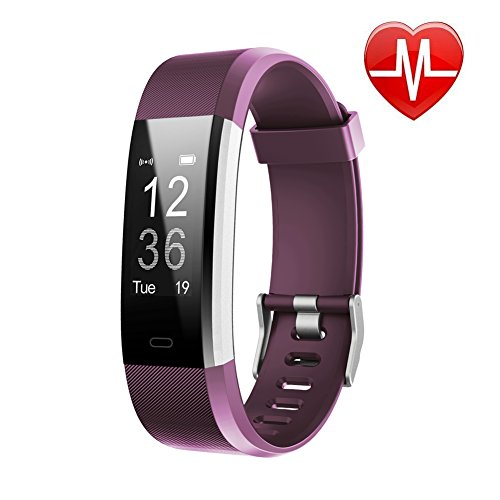 In general, we recommend these products in the order they’re listed above. The Kimitech is easily the best product of the bunch, though it’s also the most expensive. Admittedly, the $10 difference isn’t that much, but it could make all the difference if you’re on a tight budget. If you can’t afford our top choice, the Damusy is a good alternative.

The Willful and LETSCOM models are a little more prone to failure, making them a secondary choice for most buyers. That said, their different exercise modes are a great feature. If you exercise in many different ways, it may be worth getting the Willful for this feature alone.

The LETSCOM isn’t a bad fitness tracker, but the issues with the pedometer make it hard to recommend over the Willful (which is definitely the closest competitor).